Updates to Mark's profile since your last visit are highlighted in yellow. 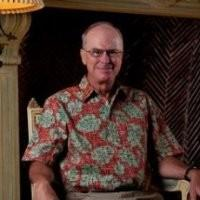 What have you been up to since you graduated?

Well, I went to college. I graduated from that and entered into a 40 year coporate career that was distinguished only by my ability (supernatural, it seemed) to duck the "RIF bullets" that flew numerous times over the decades. In 2011 I took one of those RIF bullets. When I called my financial advisor to tell him of this change, he paused and replied, "Mark, you don't have work." THAT IS SO COOL. Retirement is the absolute best. I have no idea where the time goes, but every day seems to fly by.

I've never been goal oriented. If that's a problem, then I guess I have it.

Comment
What would we be surprised to know about you?

Not much. I will say that be being married to Peggy is much better than Peggy being married to me. The day I retired Peggy announced that she was retiring also. Peggy was a chef. Let me tell you, I can't imagine anything cooler than being married to a chef. I was able to tag along with her and do things that I would have never done it wasn't for her. Actually, we are still doing fun things because of her connections.

Not much changed. We are no longer cooking meals for the NASCAR team, but we still enjoy seeing our friends when they visit the track in Fontana.

Since we started dating in the mid-1970s, Peggy and I have enjoyed going to concerts at the Hollywood Bowl a few times each summer. The other day we attended our third for 2019. Outstanding.

I'm beginning to panic, a bit, about my wine situation. My consumption is not outpacing my procurement.


So, I received Paula's note asking for input on hobbies, interests, activities

As a retired guy, I have two goals:

-- Not to outlive my money

This is pretty tricky, but I don't have anything better to do than to work towards these goals.

So, since my college years I have had an interest in wine. Since retirement in 2011 I have had more time to invest in this interest. While there is nothing like actual experience, there are a number of on-line resources that (1) provide me with interesting information and point me in new directions and (2) suck up a lot of time.

Let me say that I am a California wine bigot. Yes, there is amazing wine from all over the world, but, at this point in life, I just don't care about a wine that comes from grapes grown in a 2-hectare vineyard on a south-facing slope near some small village in Croatia.

So, feel free to talk to me about Napa Valley Cabs or DCV Zins, or Anderson Valley Syrahs. Those always hit the sweet spot for me.


A few classmates have commented that they enjoy cruising. My first cruise was our honeymoon in 1976. Neither of us had any idea what to expect, but it was awesome.

So, over the years we have enjoyed several cruises. Last summer we realized that we were coming up on our 40th wedding anniversary. So, we started discussing celebration options.

Well, after multiple decades of marriage, I know "That sounds OK" is not a ringing endorsement. So, I keep trying.

OK, that's more like it. So, now, all we have to do is pick a cruise that encompasses our October 23 anniversary.

Because of a family situation at the time, we were reluctant to do any traveling in which an emergency return home would take more than a day. So, two cruises popped up that seemed attractive to us:

-- A Vancouver, B.C.-to-Los Angeles itinerary on the Star Princess

Neither of us enjoy airports or airlines, and, so, that was a minus on the Star Princess cruise. Then, Peggy mentioned that the 40th anniversary gemstone was the, get this, RUBY. I'm pretty sure there is not a dude in the world, not in the jewelry business, who knows this. Anyway, our decision was made. We had a great cruise on the Ruby Princess. We brought multiple bottles of our own wine on board, on our anniversary we booked the "Ultimate Balcony Dinner," we received no panicky calls. It was great.

The family situation mentioned, above, has resolved itself, recently. So, we are now able to expand our travel radius. In September we are taking a round trip cruise out of San Fancisco to Alaska. Yes, we are going to suck it up and deal with airports and airlines. Then, in April 2018 we are taking Princess' first-ever round trip Alaska cruise out of Los Angeles. We intentionally pick early-in-the-season/late-in-the-season Alaska cruises because Peggy is, definitely, a "foul weather" cruiser. She wants to feel that she is at sea. I'm pretty sure that her aspirational cruise is a November/December North Atlantic crossing.


We have both been interested in motorsports since our third date in 1975--a 500 mile Indy Car race at the Ontario Motor Speedway.

As a direct circumstance of Peggy's job as corporate chef at Lawry's foods, we have had a lot of fun when NASCAR comes to the west coast. Since 2005, we have helped out various teams by preparing meals for them on practice, qualifying and race days. Believe me when I tell you, this is a fan's best dream, to get a garage hot pass, to be able to walk into the hauler as a team member, to watch the race from pit road. Very cool. Peggy is on "hugging terms" with people like Ray Evernham, Kasey Kahne, Richard Petty, Boris Said and multiple engine tuners, shock specialists, tire changers, truck drivers. I am quite well-known as Peggy's husband.

Last weekend in the IMSA paddock at the Long Beach Grand Prix I met up with Ryan Wellman who used to be the tire specialist of the team we worked with, last year. He is now the car chief for the #50 Riley Motorsports AMG/Mercedes in the IMSA GTD series. Well, they won their class in the race. Very cool. He reported that the trophy was big, and the champagne was great.

I also ran into Boris Said in the IMSA garage. Yes, he knows me as Peggy's husband, but he is such a garrulous guy. He loves to talk with anybody.


Here's something of interest. Next week we're getting our house repiped. There is an aggravating down side to home ownership.

I never new Eileen until I joined thise web site a few years ago, but I genuinely enjoyed her postings.  I am so sad to read this news.

I never knew Eileen until I joined thise web site a few years ago, but I genuinely enjoyed her postings.  I am so sad to read this news.

Mark Larson
Mark Larson added a comment on his Profile.
Back to Mark's Profile Details

Wow, it's hard to believe that good looking kid from 1966 turned out so pathetic looking.